Alright, I know this blog is going to piss a lot of people off, but it’s just something I have to write about so hear me out.

There was a time when tattoos were bad ass. They were a bold statement that outcasts, carnies, rockers, rappers, artists and the deranged and crazy, forgotten members of society (to which I will always adore) etched into their skin as a declaration of their rebellion.

Tattoos were for the proud freaks of society. Something the underground world of misfits utilized to distinguish themselves from the square community. 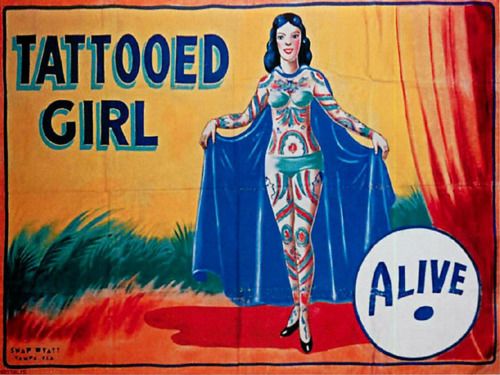 Bad news, the square community stole our idea. Now, every hive-minded, basic bitch or bro on the planet likely has ink or is thinking about getting ink as you’re reading this.

I’m sad to say, what was once a statement of raw defiance has become (and has been for a while now) a common, trendy practice. Dulled in the water.

Over half of the dorks that graduated in my class (2001) that thought I was a freaking weirdo for having a pink mohawk in high school, now have tattoos.

No. They’re still the same bland, boring and predictable “normies” that they were back in high school, only now they’re covered in tattoos.

This begs the question; did the tattoos make them “cooler” or did they collectively make tattoos less “cool”?

Unfortunately I have to go with the latter.

Don’t get me wrong, I think there are some amazing artists out there doing amazing work and I don’t want to see the death of the profession. I just think it sucks when “everybody” starts doing something that was meant to be unique and rebellious. (yeah, I guess we know how the Maori Tribe feels, eh?)

The same thing happened with earrings, colored hair, the ‘punk’ look and dozens of other things that used to be an actual statement.

People are free to do what they want, I suppose, and maybe I should just keep my unpopular opinions to my damn self, but that’s just what I think, tattoos just aren’t cool anymore.